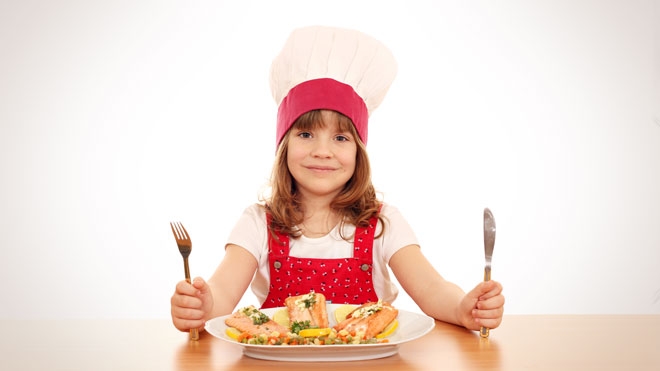 Getting Your Little Ones to Bite on Fish

Every parent has heard the words: “I don’t like it. What is it?” There’s just something about the idea of putting a new food in their mouths that can make even adventurous kids back slowly out of the kitchen. Getting your child to try, much less like fish and seafood, may seem like a daunting challenge but a proven trick or two can turn him or her into a seafood lover for life. Just remember, there is no shame in using a few, er, deceptive tactics. Or as we prefer to call them, strategic misrepresentations. It’s easier, and more realistic, to expect a child to eat fish if you slowly introduce it into what you know they like to eat. So if mac ‘n cheese is a favorite, make a simple mac ‘n cheese ‘n cod. Just put in a little, flaked poached or steamed cod at first. Barely enough to notice it. And then gradually increase the amount you use over time.

By the fourth or fifth meal, your child will be expecting more fish in the dish. Kids also like food they make themselves – especially when it’s in a fun and familiar form. That’s why fish “hamburger” patties, fish sticks and fish tacos are often a hit. When your child helps form the fish cakes or decides which sauce to dip the fish sticks in, or which cheese to put in the tacos, he or she will feel more “ownership” and pride in the meal. Hint: little fish sliders made with small mild Pollock or Cod patties are often a big hit. Yet another way to get kids to eat fish is to by taking them out to eat at a fish restaurant. If they’re younger children (toddlers), set them up for success adventure by asking them if there’s any kind of fish they’d like to try. If they don’t know of one, suggest something like flounder or sole – telling them these are sweet, tender fish that don’t have a fishy flavor at all. You can also tell them they get to decide how they want their fish made.

Baked or broiled. With breadcrumbs and butter. Or over some pasta. Most restaurants will accommodate these simple requests. Remember, that young palettes are just as sensitive to textures as they are to taste. So make sure they order something moist and not too chewy or tough (ie, stay away from the calamari!) Once they’ve had a positive experience in a restaurant, you can then make the same dish for them at home. Of course, even the best planned fish dishes can meet with resistance once you get them to the table. It’s always good to have a couple of Plan B’s in your back pocket, just in case. Take a partial victory over a full victory by encouraging your child to eat two bites of fish and then, if they still don’t like it, let them off the hook after praising them for trying something new. Finally, don’t hesitate to play the sibling rivalry card. If one child doesn’t want to eat a salmon cake or fish taco, just give it to his or her brother or sister. Works almost every time.